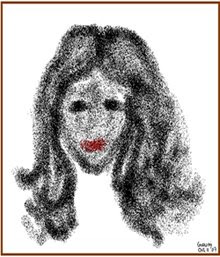 In that small moment
When I lost you
Life ended and began all at once
Everything smelt new...

Time betrays without a tinge of emotion
And the clock ticks on.
Why then, live a burden of memories
When life never ceases to make new songs?

In small moments
I look at raindrops clinging to green leaves
And sparrows hopping about on window ceils;
Squirrels scampering up the trees

Time smiles a sly smile
And says: 'Nothing will change
Whether you be
Or choose not to be'

For in small moments,
When I lose many more
Life can begin all over again
For nothing is never the end...

The neem tree cried yesterday
It had seen me grow...
It shed lush, bitter tears,
And hustled about in pain
As I got ready, bejeweled and made-up;
It suddenly began to rain.
The neem laughed at the irony
At relief and salve unasked;
It wanted to brood in solitude,
pampering the pain.

My grandfather would sit below the tree,
Bare-bodied, with only pajamas on.
The neem would sway from side to side
to greet the old man a good morn.

As I ran about from shrub to shrub
Marvelling at the nests littles birds made,
My granpa would hold out his arms
in an effort to embrace...

Grandfather is gone,
the tree sways in loneliness.
It has grown heavier under the burden of memories
And servants urge that the tree be relieved.
As I agreed, in a hurry to go
The neem tree overheard.
A loud cry it muffled.

Eat, Drink and be merry
Party, yeah, party real hard…
Dance: twirl yourself round and round,
In circles till you get dizzy…

Then sip some more from the
Whisky and the beer,
Then, drive fast, faster
And mow up someone sleeping still…

Put just a few people to sleep-
Sleep, Sleep, a peaceful sleep…
By driving your car over them,
But still, drink, drink and drive, you will… 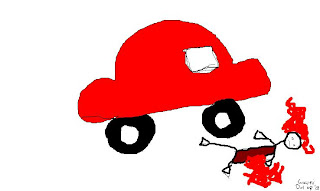 Then get out of the car,
And shout, shout an arrogant shout,
On the recently bereaved…
Whose dear ones were crushed in sleep…

To the youngsters who allegedly drove over sleeping daily wagers at Carter Road, Mumbai- killing six on the spot, including one seven month pregnant woman… Several more lie seriously injured…

To them, (and such alike…)who still showed no remorse…

Click here and here to read more about this accident.
Posted by Gauri Gharpure at 8:37:00 PM No comments:

Jessica Lal... Shot dead in cold blood. Witnesses turned hostile and police behaved brilliantly enough for the common man to lose all faith.. And Judiciary!! The black coat mites might as well be on summer vacations all year long...

I penned down a short story, trying to put myself in her shoes. This is what resulted:

The concept of lesser and higher mortals must have been evaluated well before being implemented. I have come to believe mortality depends on the less or more you have…

I woke up. Or was I sleeping at all in the first place? I imagined the pillow to smell salty and yearned for that comfortable wetness against my face. Crying can make a clumsy little pillow a tiny heaven of sorts. Only if I could cry my heart out…

Blood shot out. I saw in amazement, in a flickering moment, the beautiful red. My favourite colour. The thud I heard when I fell on the shining marble floor mocked at life. Dull, loud and sudden. I could feel the intensity of each part of a second till I felt the cold stone.

You read about such things and it creates a high drama. Yet when it happens, the moment is as real and deliberate as drinking tea or making love. You sip in each second of the act. As if bathing your soul with the realisation of each moment of action. Life doesn’t let you escape its nitty gritties. Neither does death allow such luxuries.

Death breathes in the last breath of life with such skill and intensity that it is utterly ironic. Such precision for the last moment seems a little out of place. It totally envelopes you in its mysterious process. The moment of truth comes in all its unabashed nudity. Death comes with a downright bare and basic approach. Well focused on its mission.

It was a busy night, a night of serving drinks and more drinks to a large number of people who considered themselves the top brass, or better still- ‘higher mortals’. They groped each other, oblivious of age, sex or reaction. Their shrill screams of feigned laughter competing with loud music didn’t pierce my ears. I had long since gotten used to such a racquet of excess of everything.

I was preparing to leave. It was well past the closing time. The thoughts of going home, the luxury of a cold shower and sleep almost took me to a different world. I was about to leave the bar. Just about. And then this man came up to me and asked for a drink. He smelt of alcohol and looked like a human. But his eyes gave him away. Beast. Eyes, as if screaming, ‘This Goddamn world is under my belt’. Ha!

I refused to serve. Politely at first. And then firmly when he didn’t budge. I remember the swears which followed. But they stopped midway. I wondered why. In that minuscule moment, he had already taken something out of his pocket. And then I felt the blood.

It was an odd hour much before dawn, which I fail to describe even today. It had a strange smell to it. Time smells strange when future is about to pounce on you. Or was it blood?

He saw me fall on the floor with indifferent eyes. There wasn’t a tinge of any emotion. My eyes searched for a sign or regret or remorse in vain till they lost focus. He hit his hand on the counter in frustration. Like someone does to regret a careless move in a game of chess.

As I fell on the floor, few men gathered defensively around him and shouted to the no one in particular, “We did not see who fired, did you?” Then they roughed up someone who attempted to speak up. They took the petite socialite owner of the bar aside. Her make-up was drenched in sweat and was giving away the sight of withered, freckled skin. She nodded in agreement. Only a few weeks before she requested that I fill in for more shifts. With a few final settlements, the gang rushed out, pulling the beast with them.

There was complete silence for a moment. Hushed whispers followed the coward quiet. As the socialites brushed against themselves the costly fabric made a papery sound. There was a faint tinkle as liquor glasses were kept down in a hurry from all sides. A few civil servants, top policemen and who’s who of the city quietly walked past my pool of blood and slipped out.

I expected to lay there for hours. Uniformed strangers would arrive in a short while and take over the scene. The murder mysteries I had read with gusto were complete with descriptions of forensic investigations, those rubber gloves donned to handle objects at a crime scene, a photographer taking shots at various angles… But what did I see?

The petite bar owner peeked down at me with a worker who had a huge mop in his hand. He approached me with a mixed expression of fright and sorrow. She motioned him to start his work. That beautiful red, which ran in me only a while ago, had oozed out to be wasted on the floor. The worker soaked it in the cloth and squeezed in a bucket with shaking hands. My favourite colour smelled sad now. The activity was repeated again and again, till the marble surrounding me appeared as clean as before.

Immediately, the petite socialite ordered other servants to pick me up. A group walked behind the party towards an expensive car and reached a nearby hospital. It was just a formality I guess. The beast had conveniently slipped off in a car, with a bunch of goons protecting him.

I cannot forget that arrogant look and the frustrating winsome smile he refused to give up. Each effort to revel the truth was brutally crushed. The judiciary I had looked up to presented itself in faith shattering shades.

Indeed, the concept of lesser and higher mortals must have been well evaluated. Mortality, perhaps justice for that matter, depends on the less or more you have in this country.

The virility of life had drained out of me with surprising agility. The moment was too short to agonise over how unfair it all was. A loud thud, a wet and cold back and one last gulp of air. I didn’t realize I should have cried then. My last cry…