A peahen lays eggs on our terrace or in the vicinity of our house each year. There's a lot of excitement when the eggs hatch and chicks jump down*. Thus begins the first adventure of their life: to jump across our boundary wall and into the fields. This time, we saw three chicks.

Two chicks were stuck in a plot behind us and could find no way to escape. The neighbours gingerly caught them in a bucket and we released them in the fields adjacent to our house. The third, perhaps the youngest and the weakest, stayed behind, hidden somewhere. After a while, Baba heard its persistent calls in our garden. 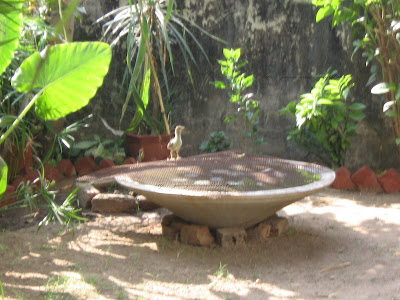 The peahen came back for this chick. She was constantly flying up to the wall and was urging the baby to climb one of the plants and jump out. 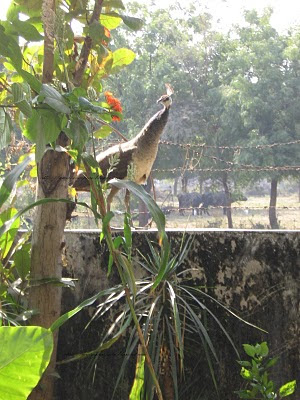 "Mama's here... Yippeee"
She then guided the chick to the other side, where there are more plants. From here, her baby could jump out easily. 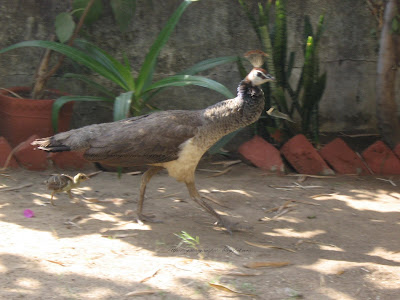 "I will be a good boy now, promise!"
After about 15 minutes or so, we stopped hearing the baby's chirps and the mother's beckoning "quack quack". The chick had jumped outside and started a new life with its two siblings.
* Unlike chicks of other birds that have to be fed and raised for a month or two before they are able to exist independently, peacock chicks are nidifugous and leave nest minutes after hatching.
Posted by Gauri Gharpure at 8:11:00 PM 16 comments: