Few quirky, lovely poems and how poetry can breathe free in face of censorship

It's strange how you read what you do. Looking back, I realise that my appetite to read and my choice was directed by a series of coincidences — due to statements made by the way, interesting blurbs, names referred persistently by disconnected sources...

It was through one such convoluted reading spree, that I got curious about Allen Ginsberg. Having read Jack Kerouac's On the road, and having finally decided that I wanted to read more of him, I began surfing the net for beat writers. A series of web links enlightened me about people like Ken Casey, beat weirdos like Neal Cassady and Allen Ginsberg. Ginsberg rang a bell for some reason.

After a very long time, in Ginsberg I have found a poet I quite enjoy. Here's an except from A Supermarket in California:

In my hungry fatigue, and shopping for images, I went into the neon fruit
supermarket, dreaming of your enumerations!

What peaches and what penumbras! Whole families shopping at night! Aisles
full of husbands! Wives in the avocados, babies in the tomatoes! --- and you,
Garcia Lorca, what were you doing down by the watermelons?

I saw you, Walt Whitman, childless, lonely old grubber, poking among the
meats in the refrigerator and eyeing the grocery boys.

I heard you asking questions of each: Who killed the pork chops? What price
bananas? Are you my Angel?

Ginsberg has that typical focussed link between him and his words — he seems to obliterate everything else. There's no room for explanation, he doesn't bother to cut out ambiguity and his thoughts flow unrefined and unmanipulated. That Ginsberg saw Whitman in the supermarket may be due to the psychedelic drugs beat writers indulged in to get 'poetic visions'. But the fantasy has been written crisply, with a sense of real time and humour.

I tried to see how many figures of speech I can find in the lines and here's what I got...

In my hungry fatigue

Metaphor, Personification: Fatigue given the animate quality of being hungry

Wives in the avocados, Babies in the tomatos- Is this Assonance? (the sound of avocadoes and tomatoes)

And you, Garcia Lorca- Apostrophe

I saw you, Walt Whitman..... Apostrophe

Who killed the pork chops?

Another racy poem is Velocity of Money. An excerpt:

Now everybody’s atheist like me, nothing’s sacred
buy and sell your grandmother, eat up old age homes,
Peddle babies on the street, pretty boys for sale on Times Square -
You can shoot heroin, I can sniff cocaine

Reasons why I liked this:

1) Brevity: Thoughts are short and crisp, the flow is quick.

3) Conflict- While he says everyone is an atheist like him, there's a pinch of regret in the statement, nothing's sacred.

4) The poem is full of metaphor, including the title...

5) The economy Ginsberg complains of is all the more relevant today...

Other (tad lengthy poem) that caught my attention was September on Jessore Road.

Jessore Road is near the airport and stretches all the way to the Bangladesh border. That it had caught Ginsberg's fancy made me curious about the poem. Here are the lines that touched me the most:

Where are our tears? Who weeps for the pain?
Where can these families go in the rain?
Jessore Road's children close their big eyes
Where will we sleep when Our Father dies?

This site has 48 poems written by Ginsberg.

Some other refreshing poems come from D H Lawrence.

The ones I particularly enjoyed are Lies about love

We are a liars, because
the truth of yesterday becomes a lie tomorrow,
whereas letters are fixed,
and we live by the letter of truth.
The love I feel for my friend, this year,
is different from the love I felt last year.
If it were not so, it would be a lie.
Yet we reiterate love! love! love!
as if it were a coin with a fixed value
instead of a flower that dies, and opens a different bud.

I love these poems for the bold, sweeping statements Lawrence has made.

Such a non-committal, nonconformist streak is the reason I like the medium of poems. Here, writers can seize their right to speak their minds off without bothering to leave trails of explanations and footnotes. This kind of freedom of creativity — that includes the acceptance of the ambiguous and the abstract — is accorded to no other medium.

A reason why poets may evade the 'scanner' is perhaps because no one ( or certainly not many)takes a poet quite seriously. Poems are passed off as art, and given the belief that 'all art is useless' the controlling mechanism doesn't quite bother to eye it with such zeal as they try to keep a tab on journalists..

In this context, let me quote some paragraphs George Orwell has written in his essay, The Prevention of Literature:

..It follows that the atmosphere of totalitarianism is deadly to any kind of prose writer, though a poet, at any rate a lyric poet, might possible find it breathable..

..There is a whole series of converging reasons why it is somewhat easier for a poet, than for a prose writer to feel at home in an authoritarian society. To begin with, bureaucrats and other 'practical' men usually despise the poet too deeply to be much interested in what he is saying. Secondly, what the poet is saying — that is, what his poem 'means' if translated into prose — is relatively unimportant even to himself. The thought contained in a poem is simple, and is no more the primary purpose of a picture. A poem is an arrangement of sounds and association, as painting is an arrangement of brush marks. For short snatches indeed, as in the refrain of a song, poetry can even dispense with meaning altogether. It is therefore fairly easy for a poet to keep away from dangerous subjects and avoid uttering heresies: and even when he does utter them, they may escape notice. But above all, good verse, unlike good prose, is not necessarily an individual product.. (Here, Orwell cites examples of ballads)

.. And the destruction of intellectual liberty cripples the journalist, the sociological writer, the historian, the novelist, the critic and the poet, in that order..

While Orwell has written the essay with the thrust being on prose, the above words show that the position of a poet is relatively safe.
Posted by Gauri Gharpure at 1:16:00 AM 7 comments:

Of Brainvita, drawings and home

Though I checked my blog very frequently, a somewhat moody mindset kept me from writing anything. This also explains why comments remained unmoderated for quite a while. In between my no-write phase, I noticed my blog had jumped a page rank and now stands at a presentable 4. :) All in all, it's time to fill in here again...

My trip back home was good, but this time I realized with an errie finality that now my mind is quite settled here in Kolkata. More so than the touchy topic of choosing one of the two cities, it's about getting used to a particular lifestyle. I have become too used to my independent existence here and a little departure from routine, from my seclusion in the quiet afternoon hours makes me go very edgy.

I talked for long hours with my sister and tagged along with her to the many malls that have insanely cropped up in the city. In a few years, it seems malls will be within a hopping distance of everything and anything. 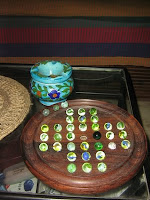 Aaji had kept aside a lot of precious little nothings for me to take away. So, I came back with a splendid wooden Brainvita plate designed on order. I always managed to leave one marble every single time (i regret i was just too lazy to use my 'genius' elsewhere) and the stall-owner at a school fair shooed me away after I won four Kit-Kats in a row...

She had also kept aside two drawing books. There were some incomplete drawings, one of which sis absolutely loved. I took out the book today and started completing the drawing. It's still not done, but looks cheerful. 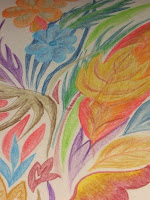 How wonderful it would be if we could resume all things after such a silent, forgotten break? 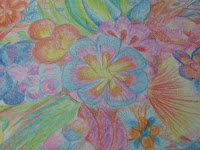