My life has changed 360 degrees in more ways than one and I am still whirling with the newness of fate, diving and keeping afloat, sprinting and slacking turn by turn.
The other day, I noticed a bunch of blood red hibiscus flowers in my garden and I borrowed something like hope and love from them. These little grey birds that flock about in groups rejuvenated me with their comical stubborn to find grub from the lawn.
Little things have begun to matter a great deal. Love matters a lot more than before. Whether one digs into the portion of love allotted on the plate or not is another story. I want to dig in.
Ever since I can remember, I have wanted to fall in love. I wrote many poems about the exercise only to realize now that I somehow mixed up the labels. It was not the love of my liking, not a manifestation of my earliest desires. Strange, how desires can take on the garb of nostalgia.
Nostalgia. Memories mixed with pain. And yet, so futile how many times we throw ourselves up to willingly get engulfed in memories that cause pain. It takes time to convince oneself that memories can be sorted and sieved, decorated or discarded, kept or thrown away. Memories are not objects, I know, but they clutter in the same manner. Over a period, I have undertaken an exhausting task of decluttering. I feel lighter, happier.
It is all in the little things. Meeting eyes. Saying yes. A squeeze of the hand. A hug. Being kind. Little things lead to love. I may be there. I have decided I am not going to be afraid. I have decluttered and I will dig in.
Posted by Gauri Gharpure at 10:25:00 PM No comments:

I published a poetry book! 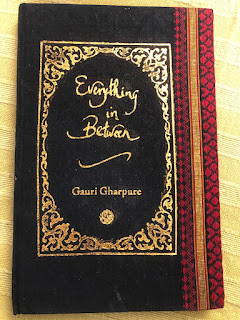 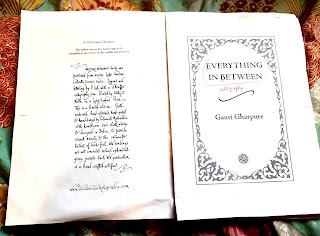 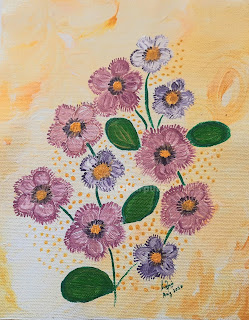 Available on Etsy
Posted by Gauri Gharpure at 6:06:00 PM No comments: 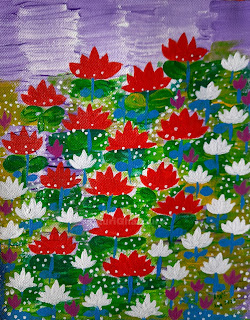 For sale on Etsy
Posted by Gauri Gharpure at 4:08:00 PM No comments:

Houses on a hill 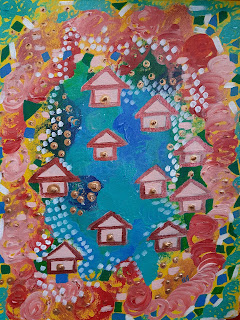 For sale on Etsy
Posted by Gauri Gharpure at 3:55:00 PM No comments:

We have collaborated with a school for special education and here are some products made by the students: 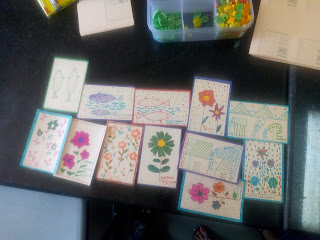 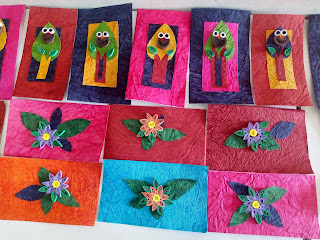 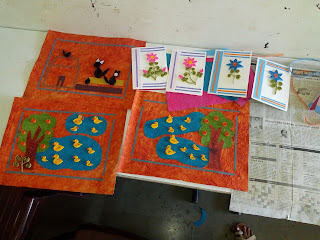 Watch this space for more work.


On August 5, after months of painful visits to the vet, Meow succumbed. 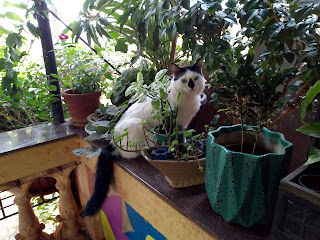 He was a weak baby from the go. He also used to be unusually scared of the slightest of sudden sounds and movements. His fear gave him an uncanny aggressiveness and a sense of territory and I would like to believe that I was his punching bag as well as his most prized possession. He was mine. I treasured him in a way I knew I could never own someone; selfishly, unconditionally, fearlessly.

Two days before he passed, I got a feeling that the end was near and I escaped the house riding on a vague excuse. I was exhausted and believed that I needed distraction to prepare myself for the inevitable vacuum that would suck me in soon enough.

The day Meow died, it rained with an ardour that even this town hadn't witnessed before. Moments before he left, he kept looking at me, his piercing gaze questioning me and accusing me and seeking assurance from me all at once. Meow had been my saviour in more ways than I can define or will to share and in his last moments, I wondered if he wondered if I was at all equipped to carry on without him.

This has been a month of mourning. Of distracting myself with fleeting people and emotions. For all the times he fell sick and threw tantrums at the vet's making treatment all the more difficult and I lay awake imagining my loneliness without him around, I must say I am doing good.

Goodbye, Meow. Till we meet again!

The other day, I came across a bunch of sealed envelopes. There were stamps too! I recognized my writing even though it has changed since, like an old friend who has adopted new fashion trends, and thought about the time when I curled the letters and crossed my Ts differently. What else has changed, other than my handwriting?

I am still in touch with all the friends to whom I promised cards but did not make it to the post box, so that's a good thing for starters. As I pushed those cards away, I realized that I have not written a letter to anyone from around the same period that I did not post those letters. I used to love writing letters and I genuinely wonder what made me stop.
Posted by Gauri Gharpure at 8:37:00 PM 2 comments:


The urge to write is nothing but the need to reach out. Authors who have books published to their name might have it easy, with readers actively reaching out to them, but for someone like me who writes mainly to create fellowship with thoughts, alleviate personal preoccupations, and find coherence as I type out each word, writing then becomes an exercise to understand oneself without the intervention of any gate-keeping mechanism. I am confident that my writing will soon pick pace and that this will again become a vibrant community that brought immense joy and creative expression to me. As I shared on another blog, the theme of the first two, or three, posts will be 'Measured Thoughts.' I have been away for a long time, a lot has happened, and yet, I do not wish to tell it all :) Let's see how this goes.

Arunachalam Muruganantham revolutionised the production of affordable sanitary pads. The film Pad Man will depict his journeyArunachalam Muruganantham is a simple man. He doesn’t come from a privileged background. After his father died in a road accident, his mother toiled in the fields as a daily wager to feed her four children. Arunachalam took up jobs as a farm labourer, a welder, a yam dealer to chip in to the family’s income. When he got married to Shanthi, he was possessed with a deep sense of love and protectiveness. One day, the new husband saw his wife doing something rather suspicious. She was scouting for dirty rags on the sly. After much prodding, his shy young wife revealed that she used those pieces of cloth during her menstrual cycles. A shocked Arunachalam asked her why she did not use the sanitary pads available in the market. Pat came the reply. If she paid money for those, there wouldn’t be money to buy milk and vegetables.This conversation set the young man on a mission to impress his wife and find a way of making affordable sanitary pads for women in rural India. The journey was long and arduous. Arunachalam was stubborn and persisted even after his wife, mother, friends and family left him and he was told to leave the village.
His perseverance bore fruit and today, the pad-making machine he made sells for around Rs. 75,000 and is used in 23 states across India. His invention hasn’t just opened a market of sanitary pads and given employment to women, it has also been monumental in spreading menstrual hygiene in rural areas. Arunachalam has given talks at IIT Delhi, IIT Mumbai, IIM Ahmedabad and at Harvard University. His family reconciled with him, the village accepted him back. Now, a biographical film starring leading actors from the industry, is set to hit screens on Feb 9.
Akshay Kumar is playing the lead role – as Arunachalam – in the film Pad man set for release on February 9. The internet is viral with photos of celebrities and common people posing with a sanitary pad. The campaign reinforces the central idea of the film that the taboo revolving around menstruation needs to be wiped off from our society.  During the course of his research, Arunachalam discovered to his utter disgust the women in villages, or even in urban areas for want to money, use newspapers, dry leaves and even ash during their cycles. Those few who use cloth don’t often dry them in sunlight because of shame and so there is no proper disinfection. While these details don’t make for an exactly pleasurable reading, remember that these are real grassroots problems that still trouble unprivileged women month after month. A 2011 survey by A C Nielson found that only 12% of women in India use sanitary pads.
A major barrier in spreading hygiene awareness is the taboo associated with menstruation in our cultures. Menstrual exclusion is still prevalent and often enforced. Most communities tend to exclude women out of the family’s daily routine for the period of the cycle. Strict rules are adhered to which leave the women feeling left out and lonely. In Nepal, menstruating women are expected to leave their house and stay by themselves in “menstrual sheds” outside the village. They are susceptible to unfavourable weather conditions, attacks by wild animals and vulnerable to assaults by men in such a situation. Age-old customs, enshrined in religious institutions bolster the taboo and exclusion of women.
In 2015, the issue of menstrual exclusion made national when a priest of Sabarimala temple in Kerala, reportedly talked to the media about a machine to scan if it is the ‘right time’ for a woman to enter the temple. The temple worships a celibate deity and doesn’t allow entry to women in the reproductive age. The open letter by a young woman called Nikita Azad and her Facebook campaign “Happy to Bleed” became viral. The Sabrimala controversy brought the talks of menstrual exclusion on a national platform. Women (mostly Hindu) are forced to follow strict rules for three days that often end up making them feel like outcasts in many families in rural and urban India. The life and struggles of Arunachalam and the recognition of his efforts in India and across the globe has helped change things. In 2016, Arunachalam received the Padma Shri to applaud his work in the field of menstrual hygiene and innovative product design that has made affordable sanitary pad manufacturing and sales possible.
Now, the film directed by the talented R Balki (whose past successes include Cheeni Kum and Paa) takes forward a crucial theme of Akshay Kumar’s body of work. Kumar’s last film was also on a topic pushed under the carpet – need of toilets. The government has made it a priority in its Swaccha Bharat mission, and many cynics wrote off ‘Toilet – Ek Prem Katha’ as an outright propaganda. It takes guts, however, to invest money and energy in a project that is guaranteed to be ridiculed and laughed off at the onset. I can’t think of other actors who could put themselves on the line like Akshay Kumar did by being a part of the film. The appeal of Bollywood still reigns supreme and this mode of story-telling gets a far bigger – and engrossed – audience than other media at least in our country. A film like Pad man, with lead characters that also include the talented Radhika Apte and Sonal Kapoor, may be more successful in facilitating introspection and change than public service advertisements.

First appeared in The Goan Everyday