A Punch on the Left

You snubbed her right in front of your comrades
For you insisted "Women must know their place."
So much for equality and social rights, Ha!
Your woman has lost her voice...

Your arrogance was pungent and sorry,
But your comrades perfectly understood the necessary dominance,
They nodded as you commanded your wife back in the kitchen,
She retreated hurt and hounded, sought solace in her sacred space.

Sir, your hypocrisy is shocking, your doublespeak commendable:
How beautifully chauvinism and culture blends in your town
How intriguing is your politics, how stinking is its stink,
Orwell was right when he conceived the idea of doublethink.

How about first bringing the revolution
you propose for the landless and the needy
within the precincts of your feudal patriarchal regime?
How about letting your wife vomit the words she has eaten up all her life?

I don't understand politics, but I was brought up in equality;
As a woman, I am disappointed in the way you live your ideology.
Don't try it on me, your wife you could snub;
But I am made of stronger stuff.

Related articles : And I am thrilled

Why the goodies? Do not demean Team India's feat

Cricket and me? Indifferent. The World Cup did wake me up and I did try to infuse some enthusiasm, the 2-3 matches that I saw were fun, but frankly, I do not understand or appreciate the hype that surrounds the 11 men all the year round, year after year.

I read a post in which a friend justifies her indignation when she hears the cynics whisper that the match was fixed. I would like to believe it was not: I was extremely angry the first time such an insinuation reached my ears. We Indians can be classic killjoys at most times.

But here, I wish to discuss how I resent the cartloads full of goodies that the government smothers the cricketers with at the slightest opportunity. I mean, nation's pride, desh ki shaan and all those passion-packed punchlines seem more advertorial-oriented than anything else. I remember getting annoyed and let down when Dhoni and Harbhajan skipped the ceremony at Rashtrapati Bhavan to accept their Padma Shree award around April 2009. I mean Hello??

I am upset for two reasons:

A)Why the largesse in the first place..

We may have a hundred other worthy sports and a hundred other sportsmen who are really good. But we are talking about Padma Shree and Padma Bhushans here, not cookies and candies! Kajol gets one, Madhuri gets one, even Saif gets one. I digress. Cricket, Dhoni and Bhajji: let them stay around for a while, a good two or three decades before conferring such honours!! Their callousness may just go on to show that the men really mean business, such hullabaloo of cash rewards and awards may be actually embarassing, irritating them too for all you know!

B) Talking about World Cup 2011. Team India did a brilliant job. Exactly. They were doing just that, their job. We are happy and proud and we love the men in blue, but the God-like reverence seems inane. It seems very cheap and unfair to other worthy professional sectors of our country: farmers, army, navy, police, healthcare workers, teachers and so on that need immediate attention and bureaucratic commitment to meet decades-old demands for better working conditions, easy loans, higher pays. It seems a fickle government that loses hold of its stoic to announce cash awards to the tune of crores, plots in prime locations the country over and a dozen other such lavish goodies to the cricketers at the flimsiest of opportunity possible.

For me, even the World Cup is a flimsy reason when it comes to crores and crores of "official" impromptu cash rewards. Would I be wrong to say that at least 0.0001% of the tax I pay shall go into their Audis and what not? Big money, luxury stuff for winning a match, rubbish I say. I cannot afford to be lavish with gifts for my own kin. I do not dispute for a second that the men-in-blue made us proud, we are happy and grateful, but are these bounties not taking things a bit too far? I have enough faith in Team India to believe they will play well, perhaps better, without these cheap gimmicks and political pull and push. Dhoni and his men earn crores by the way of commercials, let them. Do not commercialise their hard-earned game on the field.


And last question. Is money the only way to show your appreciation? Has India as a country grown so cheap and materialistic to equate appreciation with cash rewards? How can you announce such extravagant gifts on my behalf, me the tax-payer? Did you consult me? Minute as my stature be as the citizen of this country, I would like to believe my money matters and my opinion counts. How you disappoint me every time. Sorry Mr. Pawar and kin, but this largess stinks. And you, incidentally, also head the agriculture ministry. In this country getting a loan for buying an SUV is easier than getting a loan to buy seeds and fertilizers. How about less pricey onions and easy loans for farmers, Mr. Pawar?

Happy New Year, here's wishing for a new year that is happier and more promising than what all the preceding years have brought in their totality. Now that's an ambitious wish! But I can wish and hope so much only because God has been giving and because I have faith in his unassuming, mysterious ways.

Hope to upload some photos towards the evening and edit this post. So drop back later if you can.

*Gudi Padva is when Maharashtrians celebrate their New Year.

This is what I made just after posting this. 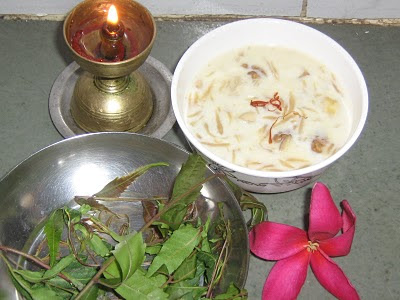 I made these little vermicelli-like brown bits from dough made from flour and milk. These look somewhat like wheat grains, and so the name "ghavle". Ghav in Marathi and Gujarati means wheat.

Wonder what are those leaves there in the small dish? Neem leaves (Azadirachta indica).. We start our New Year day by eating this bitter leaf. Many people have these neem leaves / juice or paste for the entire month... Been a very strong tradition, and my grandmother offers no other fancy explanation other than "it's supposed to be good for health."
Posted by Gauri Gharpure at 12:28:00 PM 4 comments:

A moving piece, worth sharing, worth being re-read and being passed on.

Reference: Edited excerpt, information and complete speech from Chief Logan's Lament, page 30, The American Reader, Words That Moved a Nation, Perennial Publication (2000) edited by Diane Ravitch
Background:
In 1774, there were violent clashes between Indians and whites in the Ohio River valley. Whites were reportedly enraged after a series of robberies assumed to be commited by the Indians and white soldiers wiped off a large number of Indians, including the family of Logan, the chief of the Mingo Indian tribe.

Logan was known as a friend of the whites, but the massacre, and the murder of his entire family at the hands of the whites, prompted him to retaliate. Led by Logan, the Indians went on a rampage, killed several till they were finally defeated by the Virginia militia in October 1774. After defeat, Logan refused to join the other chiefs as a supplicant before the victorious whites. Instead, he sent the following speech to Lord Dunmore, royal governor of Virginia.

Thomas Jefferson included Logan's speech in his Notes on Virginia (1784-85) ... as proof "of the talents of the aboriginals of this country, and particularly of their eloquence."
The speech:
Who is there to mourn for Logan? Not one.
I appeal to any white man to say, if ever he entered Logan's cabin hungry, and he gave him not meat: if he ever came cold and naked, and he cloathed him not. During the course of the last long and bloody war Logan remained idle in his cabin, an advocate for peace. Such was my love for the whites, that my countrymen pointed as they passed, and said, "Logan is the friend of the white man." I had even thought to have lived with you, but for the injuries of one man. Colonel Cresap, the last spring, in cold blood, and unprovoked, murdered all the relations of Logan, not even sparing my women and children. There runs not a drop of my blood in the veins of any living creature. This called on me for revenge. I have sought it: I have killed many: I have fully glutted my vengeance: for my country I rejoice at the beams of peace. But do not harbour a thought that mine is the joy of fear. Logan never felt fear. He will not turn on his heel to save his life. Who is there to mourn for Logan? - Not one.
Posted by Gauri Gharpure at 11:08:00 PM 1 comment: