Ganga Ba Patel, a freedomfighter and staunch Gandhian till the last day of her 106 years, died at 6.30 am on Sunday. 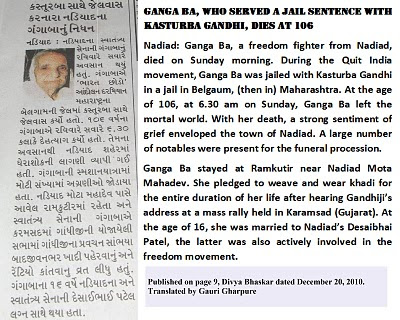 Ganga Ba was close to my mother's family. "I have never seen her in anything but white khadi clothes. Nor do I remember seeing her wearing any ornaments, not even a bindi. And she was always a skinny woman, never have I ever seen her put on weight. She walked a lot, always walked to our house, even till recently. She ate extremely simple food, without any spices. At her house, we were always served buttermilk, milk, rotlo* and such stuff. Whenever we went to her house, she was always busy doing physical work, be it milking cows, cleaning up the yard. Afterwards, when age made this difficult, she was always alert and supervising the household chores", says Miki Desai, my maternal uncle.

Gangaba's husband and my grandfather were close friends. When her husband was jailed, Ganga Ba's interaction with the Desai family grew and she soon became an integral part of the extended family. She also grew very close to grandfather's mother, Hari Ba.

"She was the 'grand old lady' who could tell anybody anything. She called my father by his name, Chandu. She could tell any man what she wanted to, be it my father, my uncle, us when we grew up. She could call us and ask us to shut up, or do this instead of that. She spoke a lot about women, how important it is for them to be strong and independent," says Miki, his recollection of the strong woman taking him back to his ancestral home and people in Nadiad.

Baba and my uncle had gone to meet Ganga Ba at her residence around March 2010. Ganga Ba had stopped walking her usual long distances, but was as alert as ever. "She had a very mischievous smile and was in perfect control over the household," remembers my father about the last meeting. Before this, they had met Ganga Ba about five years ago at the funeral of a grandmother from the extended family. At 100, Ganga Ba had walked about half a mile to attend the ceremony, talked with everyone concerned in an astute, attentive way.

I do not have any memory of meeting her. But would love to believe I have met her. As a child playing somewhere with dozens of cousins in the sprawling backyard, running about without a care, only to be caught in the spindly hands of an old lady.

Yes, I would like to believe I have met Ganga Ba.