Nano behind my house

The site chosen in Gujarat is as near as it can get to our home... When we shifted there some 15 years back, the area was fields and jungle, mango, mahua, jamun trees, hares, partridges and jackals and what not. We had a time of our lives for about a decade, but then, highways cut through, multiplexes came up, areas underwent a massive (and rather haphazard) construction spree. The face of Bopal changed. Farmers became millionaires overnight in the neighbouring areas and very slowly, a little grudgingly at first, we adjusted to the change that development brings.

I was jubilant when M messaged that Nano is now to be in Gujarat. Being in Kolkata though, this seemed the wrong emotion to express. People were still stung and sulky, and a beaming face was misfit. :D I don't know the nitty-gritties, but Baba's happy voice was enough for me start smiling. 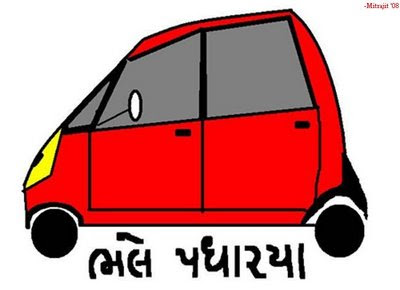