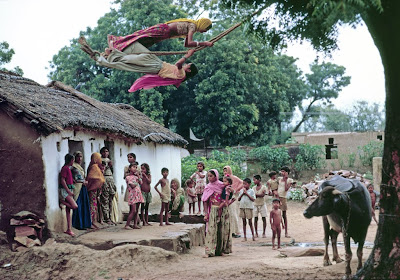 The first reaction is disbelief. It takes time to absorb the simple, delicious freedom in the backdrop of an impoverished Indian village. Two teens are touching the sky. A faithful old Neem tree and a trustworthy jute rope is all it takes to forget that they are women.

As they race against wind, their neighbors, siblings and friends find no novelty in the dizzying heights these women have reached. They look disinterested, as if they cannot determine what makes this trivial breather so interesting to a city man.

But this is as high as the two women swinging on the makeshift swing will perhaps go in their entire life. For Hathod, in Rajasthan, India, is a village where strict caste and class rules still apply. Someone else – the society, their husband, or their in-laws will soon begin to dictate the heights they can reach.

Raghubir Singh took this photo in 1975. The girls, from an assortment of ages between three to thirteen, perhaps even their young mothers, might have yearned to go to schools. Their parents might have entertained the idea for some time, too. But, in such villages, where Hindu women of certain castes are still expected to follow the purdah system, dropout rates are high.

There is no money to buy the books and the shoes, teachers don’t teach, schools have no functional toilets or water, or if everything is in place, the nearest high school may be miles away. Public transport is often undependable, certainly risky for young girls. They do give it a try though, some brave ones. Many daughters walk their way to school, their parents grudgingly, but not without some faint beam of pride, allow. But it doesn’t last long, this pursuit of the dream of a better life.

After months of juggling dreams with duties, girls give up. Because they no longer have the energy to cook, clean, milk the buffalo, and take care of their armies of siblings after coming home. These are the tasks girls cannot wash their hands off in a household with a single earning member. Or sometimes parents cannot afford to teach more kids at a time, and the privilege of education is then is given to the male children. But these women are lucky. At least they are alive.

The government and the citizens (often even well-educated, so-called modern families) systematically ignore India’s female feticide epidemic because of misplaced cultural preferences, socio-economic factors vote-bank politics and illiteracy. According to Census 2011, Rajasthan has a sex ratio of 926 girls between ages 0 to 6 for 1000 males in the same age group. India’s overall sex ratio is 940.

A Unicef report says fetal sex determination and sex selective abortion by unethical medical professionals has today grown into a Rs. 1,000 crore industry (US$ 244 million). The act that targets doctors and technicians who offer illegal ultrasound tests gathers dust in legal jargon, social connivance and corruption. Till May 2006, as many as 22 out of 35 states in India did not report a single violation of the act. (1)

While they were waiting for medical science to catch up, they devised other ways to kill their infant girls. My grandmother told me that in olden days, a euphemism was used to identify people who killed their newborn girls. Gujarati for “Doodh peeti kari,” roughly translates to “We started feeding her milk.” This essentially meant a newborn girl child was drowned in a big cauldron of milk.

In India, if a girl is lucky to be born, she becomes a woman sooner than in any other part of the world. Till then, they let her swing on a tree and touch the rainbow.

* This is another assignment for Michael Powell's class, Writing about life along the poverty line. I loved this homework, it was to select (or shoot) a photo of a neighbourhood / person / process and write about what emotions, ideas and issues the image evokes. This piece is my interpretation of the visuals, it is personal, and may be completely different from Singh's rationale for taking the photo, or being drawn to the scene.