With a childhood full of raising almost all kinds of animals from a magnificient german shephard bitch and a flock of lively hens, to caring for injured or abandoned baby squirrels, baby peacocks, etc, learning to cope with the loss of an animal is something I have slowly aquired. But it's difficult all the same, everytime.

So let me use this blog to write whatever I know about caring for Budgrigars, Lovebirds and Beta Fighter fishes- as these are my current pets...

These are very delicate little birds, orginally found in the deserts of Australia... They come in numerous colours from canary yellow, to lemon green, sky blue, yellowish-blue, white/cream, etc. Also, these are more easily bred as compared to lovebirds.

But caring for these is quite a task, as I have now come to know...

The veternary doc prescribed to give each bird a drop of Visceryl Vitamin drops everyday. For the youngest of all- 'Chhotu' who was feathering and had some minor skin infection, the doc prescribed the following remedy:

Dust the affected area with this powder once a day till the skin infection is under control.

I was also asked to de-worm each bird, and then repeat the same dose of one drop each after eighteen days.

My father, who himself bred a lot of budgerigars when I really very small to understand these nitty-gritties, was a bit skeptical about the de-worm step. His resistance was correct, as dogs pups are bound to get a bit weak after a de-worm dose.

Well, nothing happened to my birds after the first dose, but one adult male suddenly died two days after the second de-worm dose after 18 days. The only anomaly I had noticed about him was he didnt feed in the morning as all birds do. But these are very moody birds, so I assumed it was one of his mood swings..If this was related or not, the vet didn't confirm.

One day after the death of this adult, another young died suddenly.

When I say sudenly, I mean suddenly! These birds act perfectly normal just minutes before they fall down and start weakening up.

And so, today was the final blow- death of the youngest and most charming bird I called 'Chhotu'. He had an extremely unique red colour marking on his forehead, which I had not yet seen in a budgrigar... 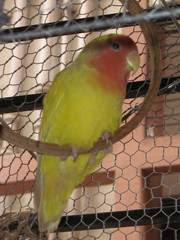 I have the 'rosy faced' pair now. With now, I mean that two beautiful green lovebirds' pair actually 'escaped' out of the cage. Yes, they escaped. I am damn sure I had closed the cage the night before.

The thing is, these are extremely inquisitive, curious and hyper-active birds. Their beaks are ever poking in anything new and anything that can move. They push around the food cups, empty the water cups and yes, I saw them experimenting with the bolting hook too. But I didnt actually think they would be able to open it and hop out. But hop out they did... And vanished into thin air much before my husband's eyes.

So one big lesson learnt- Tie the hook with a string to make sure these silly creatures don't fly away to their doom.

Another lesson which I learnt much earlier as a child was never to get carried away by emotions and 'free' a small sized caged bird. My father explained, and now I know he was right, that such delicate birds like Budgrigars and Lovebirds are almost entirely bred in captivity, having lived in cages all their life. They can't thus fly a lot. At the most they will zoom somewhere in full speed and fumble without finding a good perch. Moreover, not being native, scared and lost, these are easy preys for kites, even crows for that matter who are normally scavengers...

If the bird is tame enough and if you can aptly handle the bird, i.e. catch it again and all, you may let it fly in a room, with all doors and fans closed.

About the 'Rosy-faced' pair which chose not to hop out of the open cage. Well... it's the most charming twosome I have ever laid my eyes on. These are hopelessly silly and ever squeaking birds, a joy to behold... I thought the cage was getting a bit dull, so I hung the two wooden circles of an embroidery ring with a string in the cage. 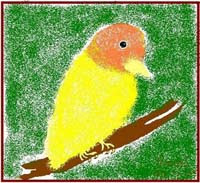 In less than two hours, the most curious one was happily swinging away... Each bird has its own unique personality and will take his own sweet time to try a new toy. Like, even though the rosy male started using the ring on the first day itself, the female took more than a week to accompany him on the ride...

I have two beatiful males. (The females are drab, not as attractively coloured, and as a rule never put on sale in most pet shops) 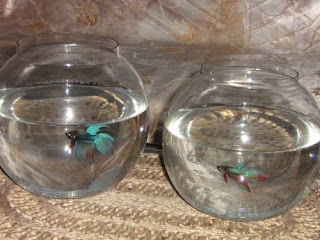 This fish is excellent for beginners, or for those who have less time on hands... It's a very sturdy fish and will deman minimum possible attention from you. What's more, with the beautiful colours it comes in, just seeing this pet gliding gracefully in the bowl is almost as good as a trip to the spa after a long day...

So as I said, this is one super low maintanance fish... Lets see what one has to do to keep it healthy and happy...

It will thrive in a medium sized bowl, but as is with all bird habitats, the bigger the better.

Before buying the bowl, ensure it does not have any crack or small leaks. Make the shop owner fill the bowl and hold it up for a while, to check if any water trickles out.

Clean the bowl regularly, and once thouroughly before introducing the fish from the polythene bag.

Fix two days in a week, say Wednesday and Sunday, and try to stick to the schedule you have maintained.

Take a clean empty bathroom mug. Carefully fill it up with the water already in the bowl.

Gently catch the fish in your hands, dont ever press too hard, and release it slowly in a mug.

A word of caution- Dont fill the mug to its brim and keep it in your view while cleaning the bowl. I had a fright of my life one fine day when i shifted my two fighters- Chhotu (again, chhotu the fish this time) and motu in two mugs, kept these near the centre table and went in the kitchen to clean the bowls...

On coming back, I saw this wrinkled blue thing lying near the tv, almost 3 feet away from the mug. In a moment, tht 'thing' started jumping. I had a hard time to react in an instant, to transfer the silly new fish-motu in the mug.

I have no idea how long it was out in this manner. Why this fish survived is because it belongs to a family, which has special accessory breathing organs called 'labyrinthine organs'. These help them to stay in oxygen deficient conditions quite easily, like their natural habitat of water-filled paddy fields in Thailand. I take extra care of 'Motu' now, after his out of the bowl escapade.

Clean the bowl thoroughly, scrub well, using a mild soap will do. Just make sure to wash the bowl again well, free of any remaining soap, for it might alter the Ph of the water..

Add one day old water, preferably aquaguard or any drinking water you normally use. (Not mineral water though)

Always retain one quarter of the old water and add three quarters of one old day water. Never change the water completely. It might kill your fish. 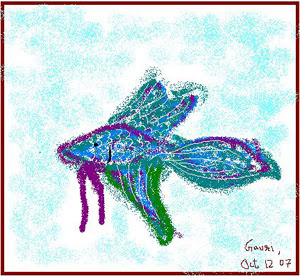 When the fish is new, you may use this treatment for the first two-three water changes:
Take potassium permanganate, quantity stricty a quarter of a mustard seed in a mugful of water. Leave the fish in this mug for a few seconds, say 10-20 seconds, or even less. Catch it and release immediately in the bowl of fresh water. Potassium permangate is very effective for fungal or other such skin infections, for the general glow of the skin, but a little more can be lethal. So be very cautious with this treatment.

Once a female fighter had a strange, mysterious and potentially disastrous symptom: The water turned a definite yellow, very clear, but a little more dense than usual in record time. I frantically called up a guy who I was told kept a lot of aquariums. He heard the symptoms as i described and told me to change the water completely, for a change! He asked to add warm water (Hottish warm, but not hot) and then sprinkle a pinch of salt over the fish wherever it moved for a few seconds. I did as I was told, although in hearts of my heart, I had lost all hope. But this female miraculously reacted to the treatment and went on to live healthily for a long time afterwards...

With food, be as miserly as you can. Don't give in to the temptations of throwing extra munches. Over feeding is most defintely lethal, under feeding is not. Ideally give in only about 0.1 cm or 0.2 cm at the max for full-grown males of the dried tubifix cubes each day. I feed my fighters only once a day and they seem to be literally thriving. Keep the dried tubifix cubes, or any other readymade pellets that you buy in an air-tight bottle. Do not let it get moist in any case. Ideally, once small pack should last more than a month at the least. If you live in a bunglow, dig up some fertile soil for baby earthworms (light pink, 2 cm to 3 cm long worms with a moist, shiny body), clean them well and throw live in the bowl. See your Fighter devour them in a jiffy. They will be very healthy if fed live food once in a while.
P.S- Search for earthworms only if you know well enough what to find and can identify earthworms from other worms with good confidence!

These fish have a great personality. Introduing any play toy may be a good idea, but the toy should not be dangerous in anyway, i.e. with sharp ends, soluble in water, etc. I put a beautiful purple orchid flower in the bowl once and it was delightful to see 'Chhotu' the fish poke it curiously for hours at end, gliding below it from time to time and seeing it from all angles. However, be careful with the showy stones the aquarium owner may give you along with the fish and the bowl. The stones I had introduced in the bowl began to deposit calcium carbonate or some such substance in a day, which my husband noticed... I had to remove the stones carefully, clean the bowl thoroughly again and wait and watch with crossed fingers to see if any Ph change had affected the fish. Fortunately, 'Chhotu' was as healthy as ever...

Hmmm... That's all I have the energy now to share with you...
Have a Happy Pet Experience...