Orphanage death in Baruipur near Kolkata 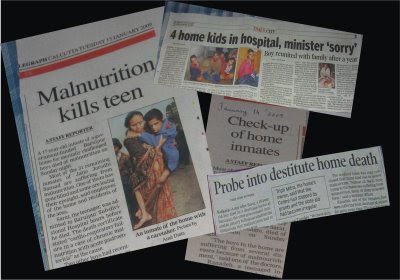 A government-run orphanage has made it to the headlines after a child died of malnutrition. Four others have a long road to recovery, after being diagnosed of severe malnutrition. A child had already lost eyesight in one eye because of this and the vision in his right eye is unlikely to be restored, fear doctors.

When this news first came, we were shocked and angry. After these two emotions, we didn't quite know what to do.

Imagining the children huddled by in a filthy room, hungry and unkempt, smelling and itching, craving for bit of food that they were denied at a place they had taken shelter. And even after this unforgiveable happening, though the state social welfare minister Biswanath Chowdhury admit "lapses on our part," he didn't find time to visit the home.

As reported here, the welfare home stank of filth, and the kids themselves were in an abominable condition, many with severe skin infections and rashes.

"When I asked for a soap, I was thrashed," said Sharif Jani Wassa.

And there was no food.

"Many of us would go to bed hungry as the food we got was too little. The ones who protested were beaten up by home superintendent Nirapad Poila," said Raju Rajik, another inmate. (Excerpts from this report)

After all this, what will happen? A probe? Of course, that's the easiest thing bureaucrats can promise to do. They will check what went wrong after it has irrevocably gone wrong.

And this may not be the first or the only such death, hints this report in The Telegraph.

After a time, your soul gets tired of the number of deaths that crave for attention each single day in a newspaper. It begs you to leave it free from such alien misery. But such horrible deaths come back to haunt you in nightmares and take you unawares. I imagine a home shrouded in mystery and secluded, inside which children crawl about in hunger and pain, and finally shrivel and die. And with a shudder, I get back to work. Another newborn has been left in a garbage vat, a child has been strangled after medical expenses began to spiral, another death is waiting to be subbed.
Posted by Gauri Gharpure at 1:34:00 PM 2 comments: