Yesterday, a news item on CNN-IBN really warmed my heart*. IIT alumni and students have come together to drive Dow chemicals out of their campuses. And so far, they have been fairly successful.

The IITians have taken a bold ethical, moral and more importantly, professional stand by urging the IIT directors to bar Dow Chemicals from campus placements. It takes great conviction to deny a job, and consequently, monetary security for youths who are just about to start their professional career.

Their move has worked not only to get this issue the necessary media attention, but also passed a definite signal to everyone concerned that the Indian intelligentsia will also do their bid to denounce the callousness of Union Carbide (a pesticide company) accountable for the leak of about 40 tonnes of methyl isocyanate gas from a storage tank. Over 3000 people dropped dead, literally, on December 3, 1984 as a result. Sadly, the Indian government and the law is still to bring the officials to task. In the meanwhile, Dow Chemicals took over Union Carbide in 2001 and is slowly trying to find a foothold in India. 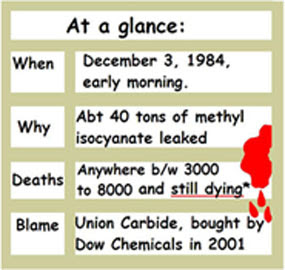 * An alarming rate of pulmonary diseases, miscarriages, cancer, etc are still attributed to the the toxic wastes left by the Methyl Isocyanate leak.

Praful Bidwai, an IIT alumnus is right in pointing out that Dow Chemicals not only acquired Union Carbide but also its liabilities. (Read the article on rediff)

Some of the most powerful campaigns have been started by IIT and IIM alumni and they see the tasks till the finish line. I applaud the moral conviction of the IITians. They have shown us student power in the real sense.

Here are some links you might want to read up:

How many died in Bhopal?

See what fellow-bloggers have to say:
Rama Iyer
Profmaster

*Surfing the net, I observed that the IITs cancelled the Dow placements on October 25, and the campaigns began much earlier. Did i skip reading the news, Or was it not reported widely?